Operational amplifiers are highly flexible integrated circuits. They can be configured to perform so many common tasks that they’ve become one of the most important building blocks in electronics.

Recently, we looked at the transistor as the basis of a solid-state amplifier; however, the operational amplifier (op-amp) is a much more sophisticated device. In its simplified form the op-amp uses seven transistors, although more transistors are used to replace other circuit elements that would be found in a discrete amplifier (i.e., one made from individual parts). Due to miniaturisation, the op-amp ends up being no larger than a single discrete transistor, yet is far more versatile and predictable.

The operational amplifier was developed before integrated circuits, and even before transistors, for predicting ballistic paths of naval shells. The 1941 operational amplifier was made from thermionic valves, or “tubes” as the Americans call them. The op-amp circuit is the basis of a mathematical circuit that can add, subtract, multiply, divide, average, and take a square root. The same circuit can also perform integration and differentiation, making it a very useful circuit for instrumentation and industrial control.

While most of the mathematical functions seem alien to the average electronics hobbyist, all electronic circuits can be reduced to mathematical formulae. An audio mixer is actually an averaging amplifier, a saw wave generator is an integrator, and an amplifier with a fixed gain is a multiplier.

So a strange computer that is now almost forgotten, was actually the basis of every modern stereo amplifier, appears in every TV, and very likely every piece of electronics other than purely digital devices! Even then, the op-amp is one or more parts inside the linear regulator, and more modern SMPS regulators. Of course, we won’t be going that complex here… yet!

GETTING TO KNOW THE OP-AMP

Most of you would know the typical IC as an 8-pin through to at least 40pin “Dual-In-Line” package, and most op-amps are available in 8-pin or 14-pin packages. Modern electronics has reduced these to the size of fish scales, perhaps 4mm by 4mm squared, or maybe 4mm x 10mm for 14-pins – not much fun for my old eyes! There are plenty of other packages and a lot of instrumentation had small tin hats that looked like metal cap transistors with eight legs. 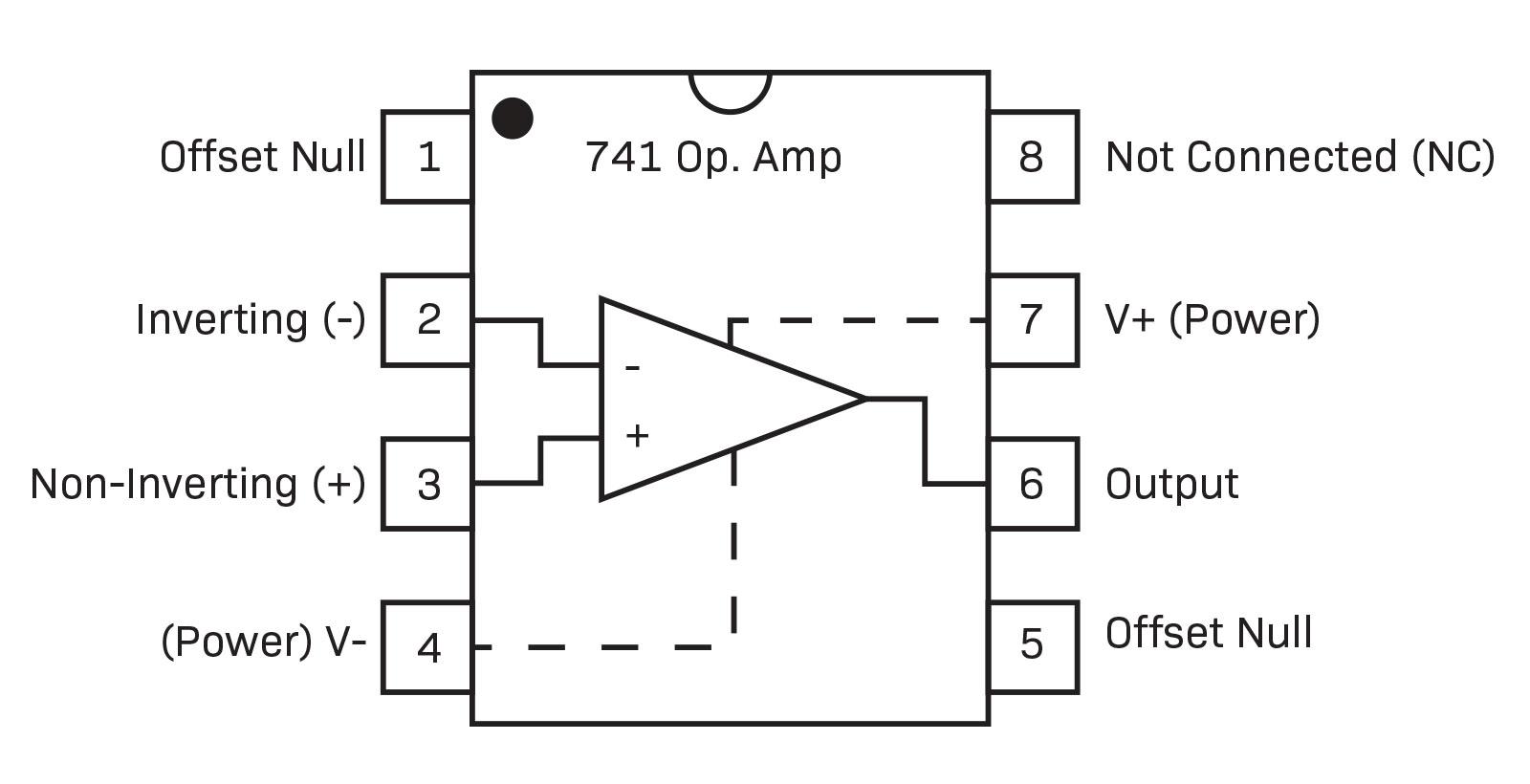 We will be referring to a typical 8-pin DIL IC, a common package for an LM741 and many of its mates. You should note that while many op-amps of the 8-pin DIP style have the same pinouts, annoyingly some do not. In effect, an LM741 circuit may allow for an alternative IC to plug into its socket, and still work. Alternatively a non-functional piece of equipment with a dead 8-pin IC may – if you are lucky – accept alternative parts, assuming it was an op-amp in the first place, and the pins have the same functions. For example, the TL071 will drop into the same eight-pin socket as the LM741 and usually work, but with FET transistors rather than bipolar transistors. Remember that the feedback ratio won’t change, but the FET device can use higher values of resistance, therefore increasing the input impedance of the circuit.

The caveat here, is that the originally selected part will obviously be a better choice for the design than the easily available LM741, so performance can be lost; but the substitution may allow you to check that the circuit works, before you chase up that strangely numbered, allusive and probably expensive IC.

The basic symbol for any amplifier in electronics is a triangle, usually pointing to the right indicating the direction of signal flow. The single output is on the tip of the triangle and on an LM741 comes out on pin-6. 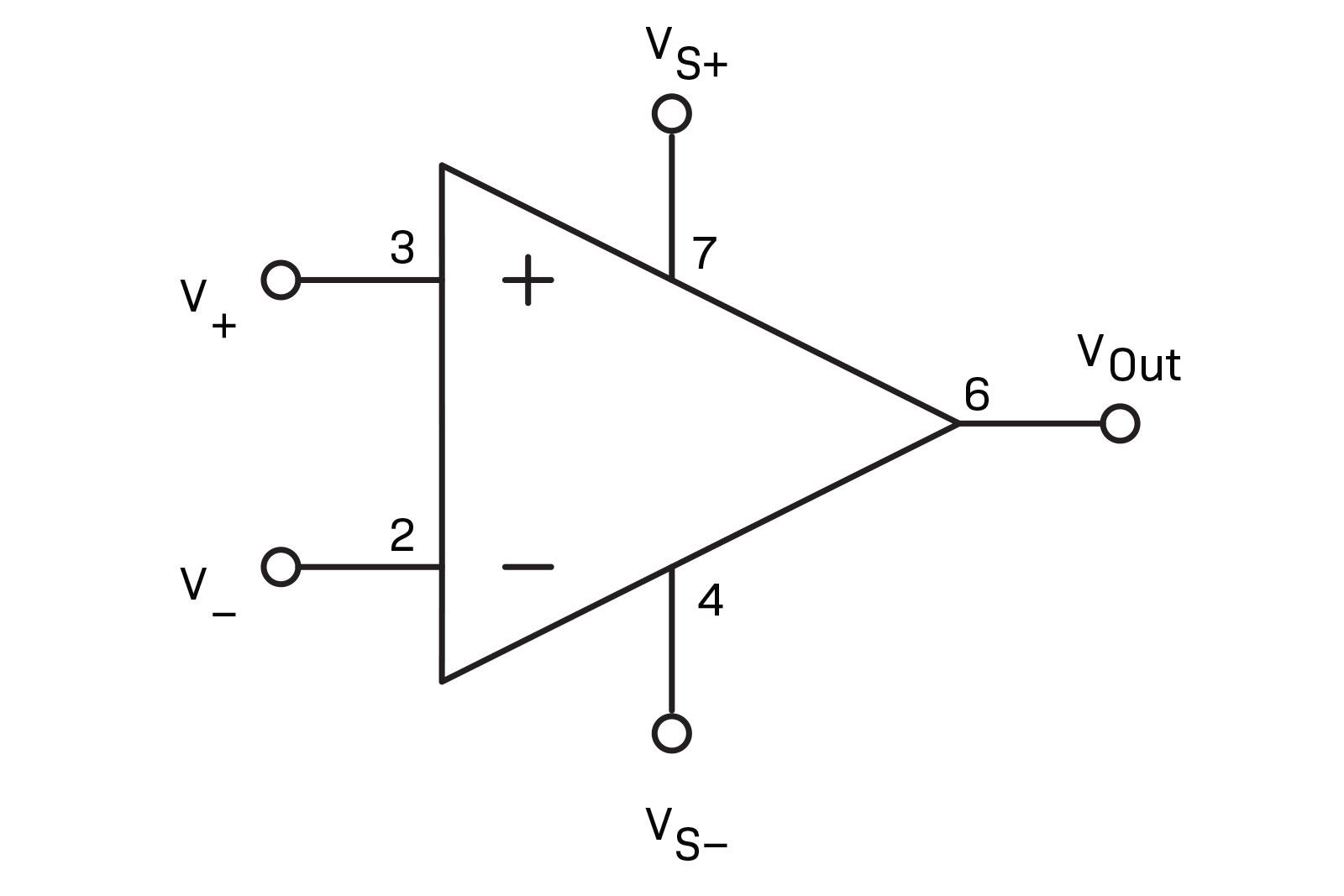 Pin 7 is therefore shown at the top of the symbol as +ve, and pin 4 at the bottom as -ve. Pin 8 is not connected, at least not on the LM741, and therefore not shown as a symbol. Likewise for pin 1 and pin 5, although used for special functions, they’re not important to our explanation at this point, and so are not covered here.

That only leaves pins 2 and 3, which are the inputs. Pin 2 is the one with the “–” sign inside the triangle. The “–” sign does not mean it only takes a negative voltage, as some may tell you. Rather, it signifies that every input to that pin will be inverted by the amplifier. A sine wave, for example, will exit the output upside down in relation to the input.

Pin 3 does not invert the signal, so for the lack of a better name it is referred to as the “non-inverting input”. The signal will exit the output pin, the same as it went in, but perhaps at a different magnitude.

Either pin may be used to drive the amplifier, and in some circuits both pins may be used, for example, to derive the difference between the signals. A commercial microphone for instance, has two signal wires inside a coaxially placed braid or shield, which is earthed to the case of the amplifier.

The two wires provide opposite polarities of the audio from the microphone, so one must be inverted, and one must not. The op-amp has both options by design and the advantage of the op-amp is that any stray signal picked up either magnetically or statically by the audio lead will be the same in both leads. As the two inputs are subtracted from one another, the stray signal is cancelled. This important function of the op-amp is called “common mode rejection”.

Many manufacturers make a version of the LM741, presumably under license, and while there may be minor differences in the numbers or how they are measured, in general all LM741, uA741, NE741 and similar will do the same job, as long as the designer hasn’t taken advantage of one manufacturer’s deviation from the standard device.

Note that the prefix “LM”, which stands for “linear monolithic”, may be common to several manufacturers, while others use their own prefix, which is typically inline with their range of products. This is a common practice in electronics and other popular ICs, including the 555, 723, 494; all have alternative prefixes from other manufacturers. So when your local electronics store offers you an IC with the same numbers but a different prefix, you might ask if it is the same component as the one you asked for, and in most cases it will be.

Sometimes, especially with the LM741, there may be stocks of alternative prefix ICs – often all in the same box! Mostly they can be considered the same, but of course, some “knock-offs” may be built to a much tighter budget. Beware of components priced much cheaper than expected as they may be, literally, CHEAP and nasty!

The LM741 power supply is typically +/-22V. Some may say +/-30V, but in this instance you can assume a different measuring definition, such as low ambient temperature, low power or similar. A good, and safe voltage would be a maximum of +/-18V, although I can’t remember where this “rule of thumb” came from.

The input voltage is listed as +/-15V for the LM741. That’s 15V above or below the centre voltage, but always less than the power supply voltages. Exceeding the supply voltage will reverse bias some internals, which is usually a bad thing!

The ratio of output voltage over input voltage is called the “amplification factor” or “Vo/Vi”. Without feedback, the amplification, or open loop gain of the LM741 is given as 200,000. Some datasheets write this value as 200V/mV, others will give the gain in decibels (e.g., 46dB). In all cases, the gain value is as close to the desirable “infinity” as it needs to be, and internal noise would make infinity very difficult to manage anyway. For ease of maths, a 10V output would require only 10/200,000 = 50 microVolts.

However, bandwidth may become an issue. The op-amp has a gain bandwidth product (GBWP), which means that the gain goes down as the frequency goes up. The GBWP for the LM741 is 1MHz, meaning that the gain is 1:1 at 1MHz. As GBWP has an inverse relationship, the gain at 100kHz will be 10, at 10kHz will be 100, and so on.

The good news is that there are now op-amps available that can work up to GHz ranges. Their GBWP would probably still be 10dB per decade, but as their GBWP is 1GHz, they should have a gain of 1000 at 1MHz.

The datasheet lists the input impedance (~resistance) of the LM741 as 2 Mega Ohms, which is good compared to most transistor amplifiers, but other specialised op-amps have much higher input impedances.

The output impedance is almost zero, which sounds good but means that without internal current limiting to 25mA, any temporary short circuit would soon turn your op-amp into a Sunday roast!

For instrumentation, many op-amps have a feature called null-offset, which allows the output to be set to 0V when there is no signal in. For most circuits, it is not necessary, but it can be important when used as an instrument amplifier. Purpose designed instrument amplifiers, which are also op-amps, may have a self-nulling function instead.

Each op-amp requires two power pins (+ve and –ve), two inputs, and one output. By making the silicon chip for two or even four op-amps inside one package, a dual op-amp can be fit into an 8-pin package. A four (quad) op-amp can fit inside a 14-pin package. One family of op-amps with FET inputs has 1, 2 and 4 amplifier packages named the TL071, TL072 and TL074. I guess you can pick which has four amps inside it.

While there are hundreds of applications for op-amps, the single most common use is the non-inverting amplifier with feedback for fixed gain. We will take it easy and show you some tricks on the way. Let’s say the aim is to amplify an electret microphone for a 1Vp-p output, assuming a 20mV output of the electret microphone.

To calculate the non-inverting gain, use the commonly used op-amp equation:

However, we want to work out the value of the feedback resistor – Rf in the formula below – from the gain and our choice of a 1k Ohm Ri. Therefore, simply transpose the formula to make Rf the object:

Unless you use 1% values and search for a 49k resistor, 47k is near enough, or 56k for a little more gain. Indeed, we now recognise that varying Rf is the quickest way to adjust the gain of the amplifier. If you wanted a gain of 100, then a 100k resistor would be very close; within 1%, so as the gain approaches the limits of resistor tolerance, it is common to “estimate” gain calculations to the same formula as used for inverting amplifiers: G = Rf/Ri. It is NOT completely accurate, but neither are 5% or even 1% resistors.

Our amplifier wouldn’t be much use without a source would it? The electret requires a series resistor to provide DC bias. The Jaycar electret uses a resistor from 150 Ohms to 5k Ohms to match the input impedance of the amplifier. As we’re using an op-amp with a very high input impedance, we could use the 5k option, but a 2k2 seems to be the popular choice, and sometimes it’s best to use what others ended up using. The electret also requires a capacitor to allow the audio (ac) to pass to the op-amp without disturbing the DC bias. That, as they say, is all there is to a simple electret amplifier to get audio into your ADC pin on your Arduino or such! Follow the link below for a full schematic, parts list, and PCB layout to build one yourself!

DIYODE on Printing with Pi

“Excellent. Thanks for letting us know, Levi Tag us in any socials of this in action....”

Levi on Printing with Pi

“Awesome build. Ended up using the news.py as a starting point and adding weather.gov API...”

“What a great project! So much to experiment with, learn and thousands of choices along...”

“Yes, less chance of letting the smoke out, right? Hope you are well, Andy. ”