Not the band, but perhaps the band’s electric style, is more than simply their name. Where does the name come from? In their own words – “High Voltage Rock and Roll – I like it both ways!”.

Electricity, and especially the transmission of electricity, can only be achieved by one or the other method. So, in this issue we compare the virtues of each: ac and DC.

Before you can tackle ac/DC, you need to also understand another measure of electricity; the concept of electrical pressure, or electrical potential.

Current flow and electron flow are actually the same physical effect. Originally, electricity was thought of as some kind of magic charge, and the charges were different, so one was called a positive charge, and the other a negative charge; it was true for so long that it became the convention.

It is confusing, but as long as you remember that current flows from the positive of a battery to the negative of a battery, and electrons flow from the negative to the positive, you have it sorted. Most of the time electricians do not think about electron flow, and electronics people do not think about current flow; just remember, both are the same in every way except the perceived direction of flow. It is only when dealing with electrons themselves that a person needs to be careful. In electronics, electrons are everything, and in electrochemistry, ions are everything; but in the electrical trade, current is everything.

In electrical systems, that is called the “EMF” or “electro-motive force”, or the “force that motivates electrons”. EMF is usually not known, except in electrical and science circles, but another name for the same measure of electrical force is known. The “potential difference” or “PD”, is the difference between the electrical force at different locations, usually within a circuit.

No doubt you will probably have heard the term “voltage”, meaning the number of volts (V), usually across a battery, which most of us are aware of by our teenage years. A 9V transistor battery – the little rectangular one – had 9V between the positive and the negative terminals [2].

That means it had a PD of 9V. If I connect two 9V batteries together, so one negative terminal is connected to the other’s positive terminal, there will now be 18V across the outside terminals. However, there will still only be 9V PD across either battery. Now, PD is the difference between two points, but the term ‘voltage’ refers to the value of that difference; naturally, the voltage of a 9V battery is 9V. However, voltage may also refer to the voltage above or below a reference point, such as the voltage of the earth itself – also called “ground (GND)”. Being the largest possible reference to us humans who live here, GND is always considered to be zero volts [3].

Between the unattached terminals of the two batteries, there will be a PD of 18 volts, yet there is no more than 9V PD between any terminal and ground. This fact will prove very important, when we investigate three-phase electricity and the domestic electricity distribution system [4].

To summarise, voltage is a measure of the potential difference between two points measured in volts, and the potential at any given point depends upon the EMF of that point.

Okay, I almost forgot to mention ac/DC, right? Well no, we simply needed these reference points first. Notice that despite the band T-shirts always appearing as “AC/DC” or “ac/dc”, I have written “ac/DC”. This is because lower case is used when the parameter is changing, and upper case refers to parameters that remain essentially the same (ref: AS1104 - Electrical Nomenclature).

The voltage on the 9V batteries we have been referring to are DC values. That means “direct current”, or that the current will always flow in the same direction. Some think it means that the voltage will not change but that is not correct. The battery will eventually go flat, but the voltage will always be DC, even when we charge the battery. To charge the battery the current must flow the other way – in the opposite direction – but it is still a direct current, even though it has changed direction. Additionally, the positive terminal of the battery is the same polarity (i.e. still positive even though the current has changed direction).

So why is ac different to DC?

Alternating current is a current that flows back and forth, due to an alternating voltage – as a result of how the voltage is generated (note: alternating current (ac) is generated in an alternator). In most circumstances, ac and DC produce exactly the same results as each other: heating, lighting, and running motors and other devices. It is only when a device is designed to take advantage of the power supply being either ac or DC, that we notice the difference. For example, some motors only run on ac, but some run on either. Some chemical processes only run on DC, yet most welding applications only run on ac. Engineering involves using the best of what is available.

Batteries only generate DC, and alternators only generate ac, but many DC generators exist, and almost all generate ac, which is then converted into DC by a method called ‘commutation’. Either mechanical switching, or diode switching is used to cause a DC current to result from an ac method of generation. DC power supplies, such as solar cells, also generate ac current using an inverter, which is the reverse of a commutator.

Electricity is only good if it is readily available when and where you need it. The Edison vs. Tesla debate (Issue #001) ended when Edison’s DC system was unable to convey power more than a few miles from the power generation plant. The DC had to be generated at a voltage equal to the voltage required at the load end, where the electricity was to be used plus the voltage that was lost in the transmission lines. As transmission lines grew longer, more energy was being lost in the lines than was being used by the consumer.

On the other hand, or in the other corner of the fight, ac could be generated at almost any voltage, fed into a transformer to be converted into a much higher voltage, transmitted to the consumer, where it was again fed into another transformer to be converted back down to the preferred voltage. Overall line losses have improved over the years, but were always a small percentage of the generated ac power.

Why Was The Power Lost?

The final parameter that you need to understand regarding basic electricity, is “resistance”. Every material known to man, at normal operating temperatures at least, has resistance. According to some, resistance is the opposition to current flow. I prefer to think of it as the toll paid by the current, for passing through the highways of electric circuits. In essence, electrons land on atoms giving off their elevated energy as photons of light, or heat, and require more energy from the battery or power supply for another electron to take that place. The resistor gets hot in the process, thus burning up energy [5].

Georg Simon Ohm was a physicist who wanted to know what materials were the best for conducting electricity. Ohm devised an experiment to test various materials, and allocate a value to each one, so the best materials would be known. In the process, and only because he understood mathematics very well – especially the formula for a straight line – he discovered what we now call Ohm’s Law: R = V/I, or put the other way around, V = IR.

EDUCATORS NOTE: Here is a great experiment to prove Ohm’s Law and demonstrate the value of understanding the basic functions (linear equation) in maths. Take a number of materials, and measure voltage required to push a range of currents through those materials. Tabulate the results and graph them, then prove Ohm’s Law is a Linear Relationship: Y=MX+C or V=IR+0.

How Much Power Is Lost?

Let’s assume that Edison’s system and Tesla’s system were given fair comparison in the late 1880s. Both are given the task of delivering power to a farmhouse 1km from town. The voltage should be 100V and the current 10A. The load will be R = V/I, 100/10 = 10 Ohms.

Tesla converts his voltage to 1000V, thus reducing the current to 1A, and at the other end converts back to 100V, thus back to 10A.

Therefore, to deliver 100 volts he must generate 103.84 volts in his alternator to cover the losses.

Copper weighs 8.94 tonne per cubic metre. How much would those cables weigh? What cost? 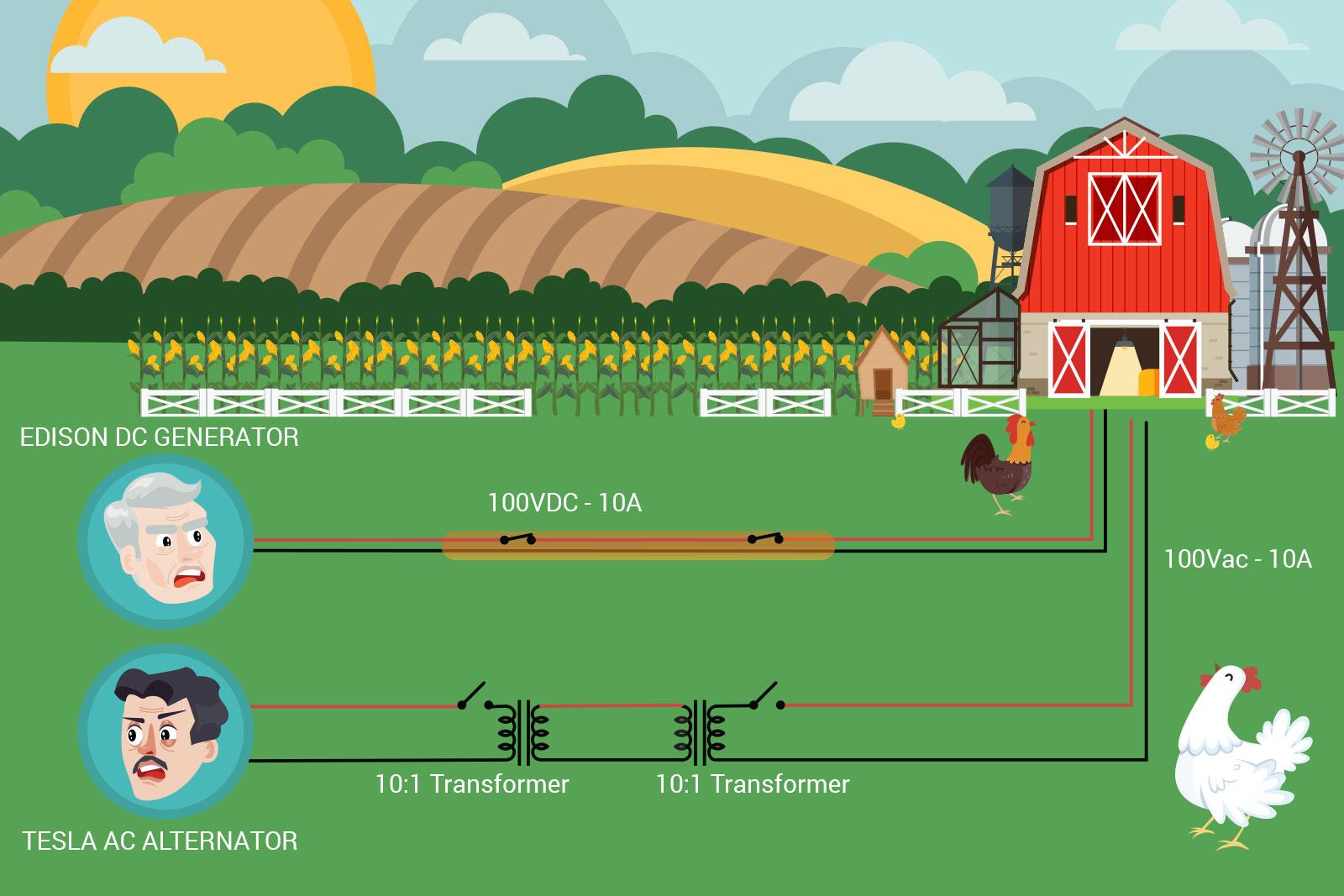 “Hi Chris Thank you for the message, and for pointing out that a schematic would be...”

“I enjoyed the article. A full circuit diagram is needed to allow better understanding /...”

“We're so glad we have inspired you. Let us know how you go. Thank you for taking the...”

“Awesome project. I made something similar to the tank sensor module from a Silicon Chip...”

“Hi again, John We made the PCB on our inhouse Bantam Mill so we didn't create a...”